Crisis Scenario Due to the Spreading of Malicious Rumors

Spreading false rumors about the organisation and brand can lead to crisis.

As a Crisis Management and Crisis Communication professional appointed to handle and manage the various crisis scenarios that may plague your organisation, the spreading of rumors can sometimes seem trivial. In fact, it is often beyond the scope of the Crisis Management professional's job description.

However, it is still important to identify and coordinate with the relevant parties actually responsible on how to implement a crisis response plan to tackle rumors. In the age of social media, rumors spread fast, and fake news can leave a big dent in the reputation of even the most respectable organizations is not answered swiftly. 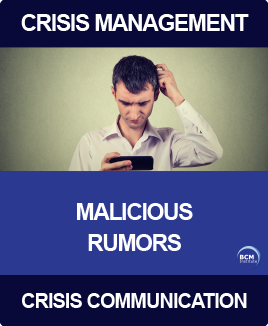 Starting in 1982, rumors of international consumer goods company Proctor & Gamble's allegiance with the Church of Satan were spread by leaflets to thousands of Californian residents, causing over 15,000 calls to the company in 1982 and forcing Proctor & Gamble to host multiple news conferences to ward off the rumors. They were forced to ask church authority figures to vouch for them, and hired investigators to trace the source of the rumors.

Rumors are circulating stories, reports, opinions, talk of uncertain and/or distorted truth. While seemingly trivial, the right rumor at the right time can cause catastrophic damage to any organization, and it is in the interest of a Crisis Management Professional to work with the relevant parties to nip them in the bud.

To cite an example, in October 2008 it was reported that Steve Jobs had a heart attack and had been rushed to the hospital. As soon as word of this news hit the internet, it started circulating across all social media platforms. Within the first hour of trading, Apple stocks lost 10% of its value (Nearly 5 billion dollars), and all of this was caused by an 18 year old posting an unsubstantiated rumor to CNN's Ireport website. Even the smallest rumors can grow and mutate and can cause untold damage to the largest, most established organizations.

These are some real example of malicious rumors that have damaged companies.

A rumor allegedly spread by Heineken distributor took advantage of Corona's yellow-colored product to insinuate that Corona not only tasted like piss, but had piss as part of one of its ingredients. The rumor damaged sales and it took the company years to fully recover from such an obviously untrue rumor.

A 2007 rumor alleging that Bananas could spread a SARS-like virus collapsed the Chinese banana market, reducing sales by almost 90%, and bankrupted many plantation owners. To make matters worse, the rumor came at a time when food products from China have come under more intense scrutiny around the world after a series of safety lapses involving toxins in many of their export products.

As seen from the examples above, the public can be deceived by some of the most outlandish rumors - so imagine what a half-credible one can do.

The report, carried on a webpage made to look like the CNN Tech site, claims that Musk is leaving his job as CEO of the company so he can focus on “Bitcoin Profit,” which is described as “a new company that he thinks will change the world.”

5.  A false rumor on WhatsApp started a run on a London bank

The impact is that Metro Bank's stock dropped 9% on the morning.

What Are Workplace Rumors?

Workplace rumors can represent a destructive force among employees. Whether the rumors are about management, company operations or other employees, they can spread quickly. Before long, people may believe the rumor even if it isn't true, and word can spread to the public, as well. While some may be harmless, it is necessary to deal with rumors in the workplace immediately -- before they are allowed to spread out of control.

If you want to find out more about how crisis is related to crisis management and crisis communication, let visit our page down below.